Every summer, the Tamar Project Florianópolis (SC), known for it important work with sea turtles, receives up to 1,300 visitors in a single day. Aiming to further enhance the environmental awareness of these visitors, the Ideal Institute and the Tamar decided to join in an outreach project of photovoltaic technology.

For this, the Ideal, UFSC and Tractebel donated two PV systems, totaling an output of 3 kWp to be installed in the Project Visitors Center in Barra da Lagoa. “The Tamar is one of the most popular projects in Brazil, mainly for schools. Bringing solar energy to the Tamar means bringing young people of this new technology, “says the president of Ideal, Mauro Passos.

The 1 kWp system was donated by UFSC and the Ideal in 2013, while the 1.96 kWp was a donation of Tractebel in 2014. He was part of the project, the grant of 5 million copies of educational booklets, which are distributed to visitors, and the training of monitors of the project so that they could answer questions on the operation of photovoltaic technology.

The regional coordinator of the Pro-Tamar-SC Foundation Juçara Wanderlinde, emphasizes the importance of facilities, carried out with the technical support of Ideal and Photovoltaic-UFSC Group. “This partnership is very important for the Tamar, as well as helping to publicize a kind of clean energy, helps in the conservation of the planet and yet we have a savings in electricity bill. Any partnership that will bring benefits to the environment is super welcome to the project, “he says.

The initiative, the Tamar Florianopolis was the second in the country to receive the Environmental Solar Seal. The first was the Tamar Praia do Forte, Bahia, certified in September 2013 by installing a microgenerator of 11.52 kW.
*Images: Instituto Ideal/Tamar-SC

The energy of each microgenerator these would be enough to power an apartment with two locals that used efficiently your electrical appliances. 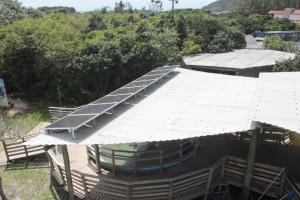 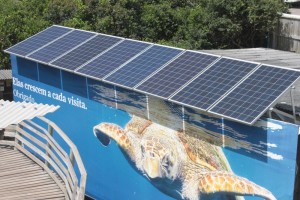