Solar Stories – The accountant from Videira

You are here: Home / Solar Stories – The accountant from Videira

Read the story of a Videira resident, in Santa Catarina state (Brazil), who installed a PV system on the roof of his house, brought his electricity bill down to almost zero and no longer worries about energy tariff increases. 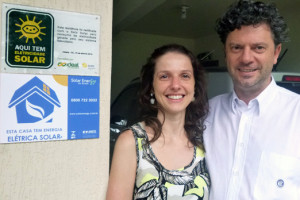 Increases in electricity bill that have scared many Brazilians no longer worry the accountant Marcelo Colle, 43. Since November 2013, he has produced his own electricity from a photovoltaic (PV) system installed on the roof of his house in Videira (SC). With a monthly average generation of 200 kWh, he has saved around RS$ 140 a month, achieving yearly savings of R$ 1,680.

At the time, he decided to invest R$ 18,000 for environmental reasons. “But today I would consider the return on investment. The possibility of connecting the micro-generator to power distribution network was crucial to improve the economic viability of the investment,” he stresses. The network acts as a “battery” in which to store the energy that is not consumed at the time it is generated.

Due to the Energy Compensation System, established by ANEEL’s (National Electric Energy Agency) Normative Resolution 482/2012, the excess energy produced by Marcelo’s micro-generator is injected into the power grid and he gets compensation in kWh from his power distributor. It means that, every month, he only pays the amount corresponding to the difference between the energy he consumed from the grid and what he generated and injected into it. As his micro-generator generates almost all the energy he needs, Marcelo only pays for the cost of availability.

An example for his neighbors

Marcelo does not conceal his satisfaction with his decision of installing a solar micro-generator. “I’m sure it was a good investment, as I know I’m saving and doing my part for clean and sustainable energy in our country,” he states.

His installation even served as an example to friends and neighbors. “Many friends liked it and some have done the same thing and are generating their own energy. I still recommend it,” he says. According to Marcelo, a pioneer in the installation of a PV system in his county, with each new installation, more people become interested in this technology.

Today, more than 1,600 Brazilian consumers are producing their own energy using photovoltaic generation.

If you want to do like them, get started with our solar simulator and calculate the size of a PV system for your energy demand.