You are here: Home / Solar Stadiums 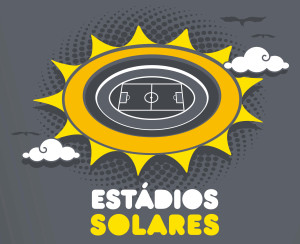 During the World Cup 2014, Brazil was a world showcase, with an opportunity to present itself as the forefront of renewable energy. Thus, in 2010, the Instituto IDEAL launched the Challenge solarise all stages would receive the games, thus encouraging the dissemination of knowledge about this technology. Thus, in the context of the project, IDEAL and its partners have assessed the energy potential of new or refurbished sports arenas, and promote a series of meetings and meetings between stadium owners and energy companies to encourage the adoption of this generation source energy. 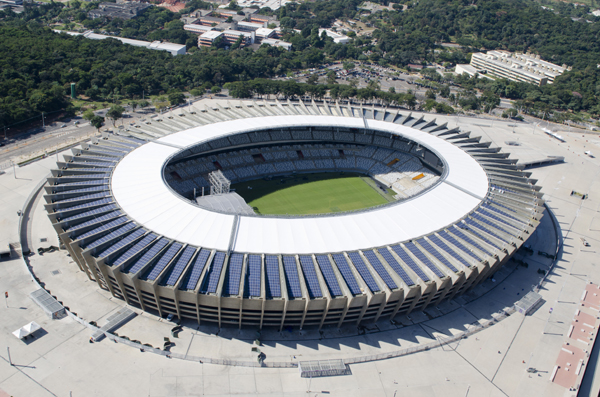 With 1: 42 MWp and about 6,000 photovoltaic modules, the stadium Governor Magalhaes Pinto, popularly known as Mineirao, was the first stadium seat games of the FIFA World Cup 2014 to inaugurate a solar PV plant in May 2014.

The project was undertaken by Cemig (CEMIG) and the State of Minas Gerais, with the support of the Ideal Institute of the Federal University of Santa Catarina (UFSC) and the German Cooperation for Sustainable Development, through the Deutsche Gesellschaft für Internationale Zusammenarbeit (GIZ) GmbH and the German KfW Development Bank.

The energy generated by the photovoltaic modules, installed radially in 88 threads available on the stadium roof, is injected into Cemig’s distribution grid.

Learn more about the project in http://www.cemig.com.br/sites/Imprensa/pt-br/Paginas/Usina-Solar-do-Mineirao.aspx 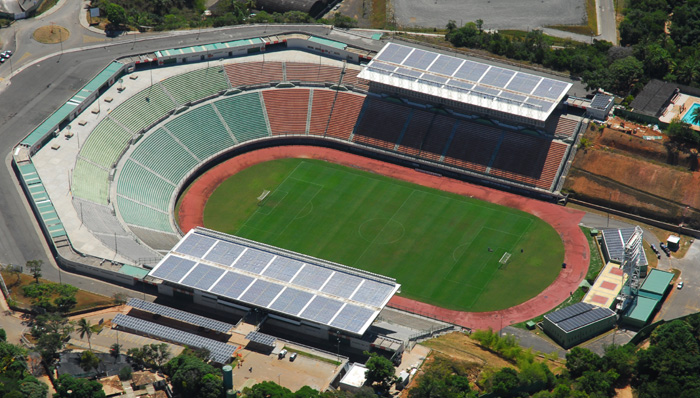 Salvador is already known for Carnaval and scorching sun. Since 2012, it has also become a reference for solar energy utilization, as now has the first solar stadium in Latin America.

The photovoltaic solar system installed has a generating capacity of 400 kWp (kilowatt peak), and uses flexible modules of thin films of amorphous silicon on the stadium roof, depending on the load on part of the existing structures.

The model chosen is one of the lightest types and the only structure needed would be the setting for sheet metal. They are flexible, unbreakable and made to be pasted directly on metal plates, they are easier and quicker to install and do not require structural reinforcement. Also, they are those with the lowest cost per covered area. The photovoltaic plant Pituaçu was the first to use this technology for this size facilities in Brazil.

The PV plant installation works at the state stadium Pituaçu began in December 2011 in a Company of Bahia State Electricity Project (Coelba), the Neoenergia Group, in partnership with the Government of the State of Bahia and institutional support Ideal Institute, technical support of the Deutsche Gesellschaft für Internationale Zusammenarbeit (GIZ) GmbH and coordination of the Federal University of Santa Catarina (UFSC).

The project was approved in 2010 by the National Electric Energy Agency (Aneel), under the Energy Efficiency Program Coelba and cost $ 5.5 million, of which R $ 3.8 million Coelba and R $ 1.7 million Government of the State of Bahia.

The energy of the stadium is used in its facilities, offset by the energy supplied by Coelba. The project generates around 630 MWh per year and an annual savings of about R $ 161 thousand. In addition, the surplus power generated in Pituaçu is offset the electricity consumption of the headquarters of the State Department of Labor, Employment, Income and Sport (Setre), located in the Administrative Center of Bahia (CAB).

Watch the story about the stadium launching at Jornal Nacional, clicando aqui. 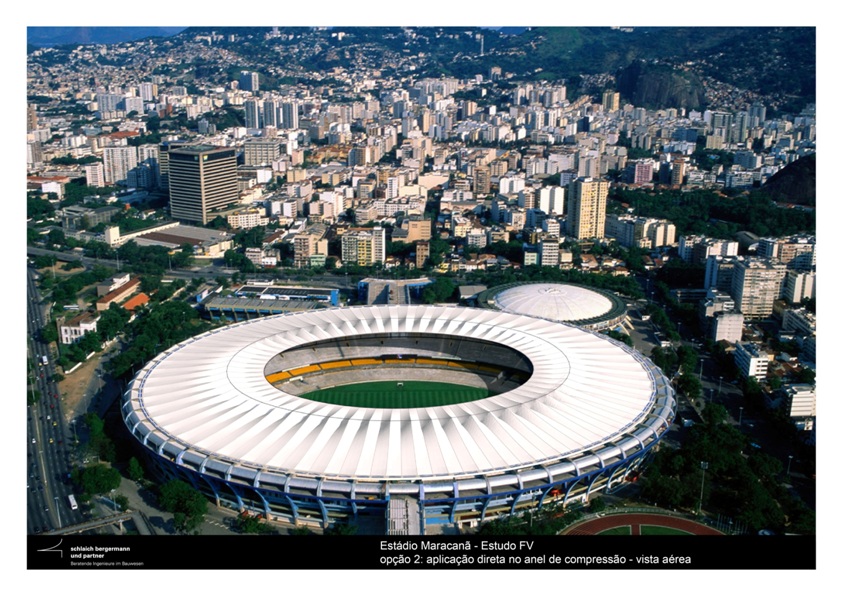 One of the great symbols of Brazilian soccer, the Maracana stadium in Rio de Janeiro, also won a photovoltaic generation system in its coverage. Opened in May 2014, the plant has an installed capacity of 400 kWp, able to produce about 500 MWh per year, equivalent to the consumption of 240 households. The state government initiative and Light under the Rio Capital Energy Program, the project has installed 1,552 photovoltaic modules on a metal frame that supports the tensioned canvas cover the stadium, in an area of 2,380 m 2 .

Solar Maracana was a proposal brought by the Ideal Institute and was supported by the German Cooperation for Sustainable Development, through the Deutsche Gesellschaft für Internationale Zusammenarbeit (GIZ) GmbH and the German KfW Development Bank.

Also check out the photo gallery of the stadium in Bremen, Germany, where they have installed photovoltaic panels, click here.