You are here: Home / Solar potential in Brazil 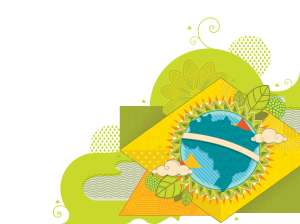 The sun shining for us – There are no Brazilian symbol as the sun: the color that illuminates our parties, the heat that makes our people so welcoming and, why not, the power that lights our homes?

The country has great potential to generate electricity from the sun. Just to give you an idea, solar radiation in the sunniest region of Germany, for instance, which is one of the leaders in the use of photovoltaics (PV), is 40% smaller than in the less sunny region of Brazil. According to the Brazilian Atlas of Solar Energy, daily from 4,500 Wh/m2 to 6,300 Wh/m2.

Despite these favorable conditions, the use of solar energy for electricity generation is still not considered as an option to feed our industries, homes and buildings. As the country already has one of the cleanest energy matrixes in the world, better integration of solar PV would be as a complementary source, approaching the generation of consumption and thus reducing losses in transmission.

The publication of Normative Resolution 482 in April 2012, the Brazilian Electric Energy Agency (ANEEL) expanded these possibilities, because it reduced the barriers for connecting photovoltaic systems to the grid. Learn more in our guide microgenerators Photovoltaic by clicking here.

While in cities there are vast areas of buildings for the installation of photovoltaic panels, in rural areas this source of energy is the cleanest and safest option to bring electricity to isolated communities and difficult to reach.

In addition, Brazil has one of the largest silicon reserves in the world. This makes the country a prime location to develop a local industry of solar cell production, creating jobs and return on taxes. In order to do so, it would be necessary to invest in research to develop a silicon purification to bring awareness to the so-called “solar grade”, which is higher than the silicon used in the steel industry. 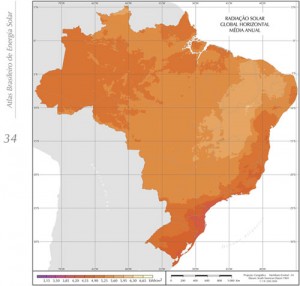 The Brazilian Atlas of Solar Energy, published in 2006, provides a survey of the solar energy availability in Brazil, using a radiative transfer model powered by climatological data and ten years of information extracted from geostationary satellite images, validated by data collected in surface stations.

The mapping of solar energy potential presented in this document was one of the products generated by the SWERA Project (Solar and Wind Energy Resource Assessment), funded by the United Nations Environment Programme (UNEP) and co-funded by the Global Environment Facility (GEF). The project was initiated in 2001, under the coordination of the Division of Climate and Environment, Weather Forecasting and Climate Studies Center of the National Institute for Space Research (DMA / CPTEC / INPE) and targeted products for solar energy applied in Brazil. They were developed in partnership with the Solar Energy Laboratory of the Universidade Federal de Santa Catarina (LABSOLAR / UFSC).

The database raised is compatible with geographic information systems (GIS) and therefore can be easily used in feasibility studies on development projects. To download them, click here http://sonda.ccst.inpe.br/publicacoes/atlas_solar.html

Other studies from the SWERA project can be found on the website PROBE – System of National Environmental Data Organization .