You are here: Home / Photovoltaic energy 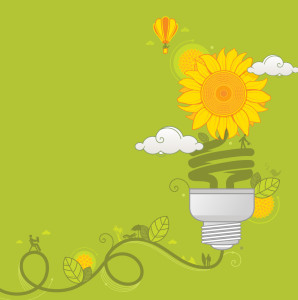 The sun beyond inspiration

How can sunrays turn to electric light? On rooftop, grid-connected, isolated, etc … What are the types of photovoltaic systems that we have today? What are the advantages of such technology? Clarify your understanding on this energy source and learn why it helps reduce global warming.

Plenty of free and clean energy reaches our planet in a daily basis. Sunrays provide light and heat, essential for life on Earth, and can be harnessed for power generation, both in the form of heat and electricity.

Electricity provided by the sun is called photovoltaic* solar energy. This term results from the merging of two words: photo, which in Greek means “light”, and voltaic, which comes from the word “volt”, the unit for measuring electric potential. 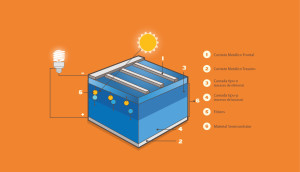 Generating electricity from the sun. How is this possible?

Sunrays are transformed into electricity in a photovoltaic cell manufactured with materials known as semiconductors. The most commonly used is silicon. Sunlight is pure energy made of small elements called photons. When photons hit solar cells, part of them is absorbed. These photons trigger the electrons of the semiconductor material, thereby generating electricity.

The higher the sunlight intensity, the greater the flow of electricity.

Electricity generated by cells is direct current, which can be immediately used or stored in batteries. In grid-connected systems, the generated energy must go through a device called inverter, which will convert the direct current into alternating with the necessary characteristics (frequency, harmonic content, waveform, etc.) to meet the conditions imposed by the public electric power distribution grid. Thus, energy that is not consumed can also be released on the network.

The most commonly used material is silicon. Since it is the second most abundant element on earth,

Thermal solar energy generation is the transformation of energy from the sun into heat to be used in water heating in homes, hotels, clubs, etc. Solar COLLECTORS are used to capture such energy.

In the photovoltaic solar energy generation, energy is directly converted into electricity and, in this case, solar modules are used.

A scratch of history

In the Northern Hemisphere, since the 1970s, solar energy has been permanently in the agenda of governments. The French physicist Edmund Bequerel discovered it, in the nineteenth century, when experiencing the photovoltaic effect with two metal electrodes in a conductive solution. Becquerel noticed the increase in the generation of electricity with light and, from there, photovoltaic technology has gone through several stages to reach the large-scale use of silicon.

The first silicon cell was produced in 1954 at Bell Laboratories in Murray Hill, New Jersey, United States. The following year, in the same country, the production of photovoltaic elements started to be applied in space activity. Thereafter, this industry has been improving and the plates have become more efficient.

In 1980, Israel was the first country to establish a public policy for solar energy. In this decade, world production was still small. In 1983, for example, no more than 20 MW was produced. In 1994, the first World Conference for Photovoltaic Energy was held in Hawaii, and the twentieth century ended with little more than 1,000 MW in installed systems worldwide.

Here’s an overview of this technology in an educational video produced by Instituto Ideal, which explains in less than three minutes what solar electricity is.

Clarify your doubts and, if you like the video, share this link with your friends! (in Portuguese only) Energia Solar from carol rivello on Vimeo.

Get to know the projects created by the Ideal Institute to help on the instalation of your own photovoltaic systems.