You are here: Home / Regulations

The Brazilian Electric Energy Agency (ANEEL) has published on April 17th a new resolution (482/2012) for easy connection to the mini distribution grids and microgenerators from renewable sources. In addition to establishing general procedures on how to connect to mini and microgenerators grids, the resolution proposes the creation of a power compensation system internationally known as net metering. With it, the owner of a small generator does not need to consume all the energy produced at the time of generation since it can be injected into the network and in the following months, the consumer will receive kWh in credits on electricity bill that could be offset by energy consumed from the grid.

The actual revenues of the first consumer units in the power compensation system began to occur in 2013 and at the end of 2015, already accounting for more than a thousand generators connected to the grid, with over 90% photovoltaic systems.

In December 2015, ANEEL published a review of RN 482/2012, the Normative Resolution 687/15, to improve some matters, such as allowing the installation of distributed generation in condominiums, with the breakdown in percentages of energy generated among investors. 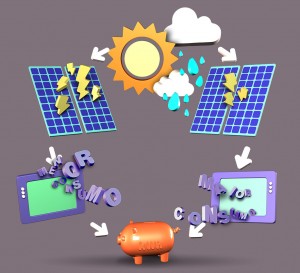 On April, 19, 2012, ANEEL published a resolution related to micro plants (micro and mini distributed generation ) – Resolution 481, which gives companies a discount of 80% on the Rates of Use of the Distribution and Transmission System (TUSD and TUST rates) over the first 10 years of the project if such companies have entered into commercial operation by December 31, 2017.